London, 11/11/2016 (MAP) – The 22nd UN Conference on Climate Change (COP22), which is being held in Marrakesh, will place Morocco as an international leader in terms of renewable energy, wrote British daily “Financial Times”.

“Until this year the Moroccan town of Ouarzazate was best known for its ancient-looking kasbah façades, used as an exotic backdrop in many Hollywood movies. But now it has a very 21st century landmark: the world’s largest concentrated solar power (CSP) plant,” it added.

Noor is the most high-profile component of Morocco’s ambitious push for renewable energy, which will be showcased when the country hosts COP 22 in Marrakesh, the daily noted.

The government has committed to an unconditional 17 per cent reduction in greenhouse emissions by 2030 compared with business as usual, and has adopted a multi-pronged plan combining renewable energy development and improved energy efficiency.

With 500,000 parabolic mirrors, the plant — Noor 1 — has a generating capacity of 160 megawatts — equivalent to that of a conventional single gas turbine power station. It is the first of three CSP plants at the site that will eventually be capable of generating more than 500MW at peak output. 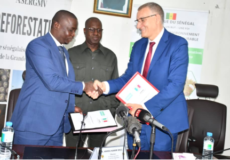