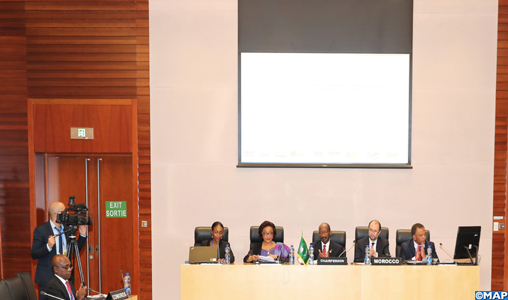 Addis Ababa – The Island States highly commended, on Sunday in Addis Ababa, the efforts undertaken by HM King Mohammed VI in favor of these countries through the Climate Commission and the laudable actions of the Sovereign in the fight against climate change.

“Seychelles commends the role played by HM King Mohammed VI, the noble actions and innovative solutions of the Sovereign in favor of the climate, within the framework of South-South Cooperation,” said vice-president of the Republic of Seychelles, Vincent Meriton, whose country chairs the Island States Climate Commission, an initiative of HM King Mohammed VI.

The vice-president of Seychelles, who was speaking at a high-level meeting prior to the official launch of this Commission, also expressed, on behalf of the member countries of the Commission, his heartfelt thanks to HM the King for the keen interest that the Sovereign attaches to the fight against climate change in the Island States like other countries.

During this meeting, held on the sidelines of the African Union Summit, in the presence of minister delegate to the minister of Foreign Affairs, African Cooperation and Moroccan Expatriates, Mohcine Jazouli, the ministers of Foreign Affairs of African Island States highlighted the leadership of HM the King and the Royal Vision for a strong and resilient Africa.