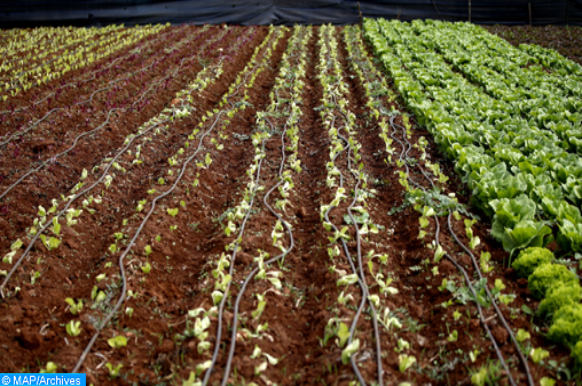 Marrakech – Morocco remains keen to make available to brotherly and friendly African countries its experience in the field of water control and sustainable management of irrigation, stressed Wednesday in Marrakech, Minister of Agriculture, Fisheries, Rural Development and Water and Forests, Mohammed Sadiki.

“I would like to affirm that Morocco, promoter of South-South cooperation in accordance with the High Directions of His Majesty King Mohammed VI, is open to make available to brotherly and friendly African countries (…) its experience in the field of water control and sustainable management of irrigation,” said the Minister, who was speaking at the opening ceremony of the 5th African Regional Conference on Irrigation and Drainage, a major event, placed under the High Patronage of His Majesty King Mohammed VI.

In this regard, he said that “the control of irrigation in Morocco was early a necessity to intensify agricultural development, ensure food security, circumvent the strong constraint of aridity and cope with climatic hazards, including recurrent droughts that now become structural climate of our region”.

After recalling that Morocco has proposed a series of initiatives, as part of the implementation of the Paris Agreement, notably adaptation and financing, including the Initiative for Adaptation of Agriculture in Africa which was adopted by African countries and perpetuated today by the Triple A Foundation (AAA), Sadiki, said that this initiative is part of the farsighted vision of His Majesty King Mohammed VI and aims to design solutions tailored to the problems of the Continent, while addressing the challenges of poverty and food security that require a sine qua non strengthening the adaptation of African agriculture to climate change.

In this regard, he referred to the new agricultural strategy “Generation Green” 2020-2030 and the national program of drinking water supply and irrigation 2020-2027, noting that the dynamics initiated under the Green Morocco Plan in terms of saving and recovery of irrigation water, will be continued.

The objective, added the Minister, being to reach one million hectares covered by efficient and water-saving irrigation techniques, with the ambition to double water efficiency by 2030 and make irrigated agriculture a lever for human and sustainable development.