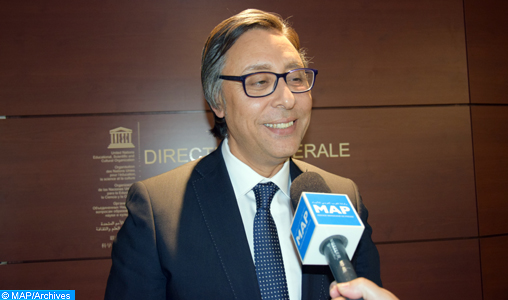 Marrakech – Morocco has opted since the 60s of the last century for a proactive and ambitious policy aimed at the management of its water resources in the long term, said, Wednesday in Marrakech, Ambassador, Permanent Representative of Morocco to UNESCO, Samir Addahre.

This policy initiated by the late HM Hassan II and consolidated by HM King Mohammed VI, reflects the great importance attached by the Kingdom to the issue of water in all its aspects, said Addahre at the opening of the 4th conference of the Global Network of Water Museums, held from 26 to 30 October.

The diplomat, who was speaking via video conference, recalled that Morocco, under the enlightened leadership of HM King Mohammed VI, continues its institutional commitment, including through two flagship programs, namely the National Program for Drinking Water Supply and Irrigation (PNAEPI) 2020-2027, for which an interministerial commission has been created to monitor its implementation in all regions of the Kingdom, as well as the National Water Plan (PNE) 2020-2050 aimed at accelerating investments in the water sector, dam construction and securing drinking water supply.

“The speech delivered by HM King Mohammed VI at the opening of the autumn session of Parliament, reinforces this momentum by drawing a roadmap for all stakeholders with strategic directions to achieve the expected objectives in terms of responsible and rational management of water resources,” he stressed.

On the international scene, there are countless examples to highlight the commitment of Morocco and its contribution to the achievement of international water agendas, said Addahre.

After highlighting the ancestral know-how developed by Moroccans for the capture and drainage of water, which has demonstrated its great efficiency, Addahre noted that this meeting is a great opportunity for the Global Network of Water Museums to make its contribution in collective efforts through reflections, discussions and possible proposals for action in view of the next UN water conference, scheduled for March 2023.