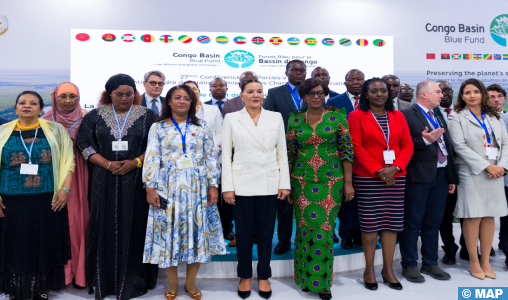 On this occasion, Her Royal Highness Princess Lalla Hasnaa delivered a speech in which she underlined the strong commitment of Morocco to support the action of the three African Climate Commissions.

“As a Founding Partner Country and, above all, as a staunch African advocate for the region, the Kingdom of Morocco is determined to contribute to the achievement of the objectives set at the First Brazzaville Summit and the concrete actions recommended since,” said HRH Princess Lalla Hasnaa, emphasizing the strong commitment of Morocco, at the highest level, to support the strengthening of the other two African Climate Commissions.

For their part, the participants in this meeting reiterated their high appreciation for the constant commitment of HM King Mohammed VI to a strong Africa able to adapt to the effects of global climate change.

They also praised the leadership of president of the Republic of Congo, Denis Sassou Nguesso, and the commendable efforts made to activate the Congo Basin Climate Commission and its financing instrument, the Blue Congo Basin Fund.