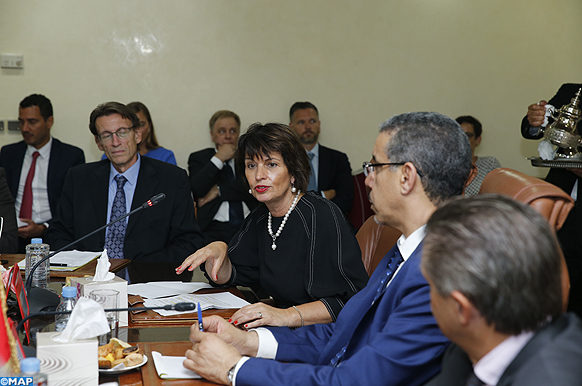 Rabat – Morocco has become a pioneering country in renewable energy, and it has a systems approach in this area, said, Thursday in Rabat, Swiss minister of Environment, Transport, Energy and Communications, Doris Leuthard.

In a statement to the press at the end of his talks with minister of Energy, Mining and Sustainable Development Aziz Rabbah, Leuthard said that Morocco and Switzerland are able, thanks to their diversity and expertise, to consolidate their bilateral cooperation, partnership, as well as institutional coordination on energy, especially after the signing of a memorandum of understanding between the two countries in late January, with the aim of reinforcing cooperation in the energy sector.

On his turn, Rabbah highlighted the excellent links between Morocco and Switzerland, which are further consolidated in different areas, noting that Switzerland is Morocco’s fifth major investor, given the significant number of its businesses established in the kingdom that contribute to promoting sustainable development and energy efficiency.

The government will set up a favorable framework to make Morocco a choice location for new Swiss investors, he added.