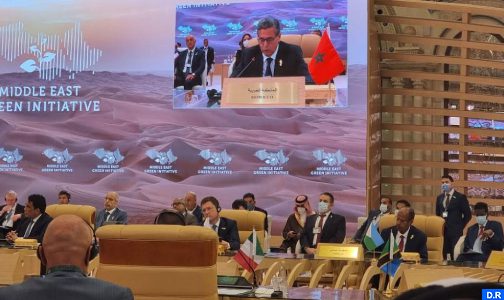 Riyadh – Morocco has voluntarily adopted an integrated, participatory and comprehensive approach reflecting the issues and objectives of the national strategy for sustainable development following the political will arising from the Royal Guidelines, said Monday in Riyadh, the Head of Government, Aziz Akhannouch.

Speaking at the Green Middle East Initiative Summit, Akhannouch noted that this strategy aims to ensure transition to green economy in line with international efforts and in accordance with the recommendations of the International Forum of Climate Experts and the Sustainable Development Goals.

The Head of Government recalled that the Paris Climate Agreement and the 2030 SDG Agenda are two key points in strengthening global climate action, transitioning to low-emission development and consolidating the culture of mainstreaming sustainability in key sectors of the national economy.

Morocco has developed the 2020-2030 National Climate Plan, which aims to adapt and accelerate the transformation to a low-emission economy, the implementation of national climate policies at the local level, as well as encouraging innovation and increasing awareness to better respond to the challenges arising from climate change, he pointed out.

It also includes the use of nature-based solutions, the production of clean energy and the development of green industry, he explained, adding that the Kingdom has revised upwards its ambition to reduce greenhouse gas emissions by 45.5% instead of 42% by 2030.

As part of its contribution to the achievement of the objectives of the Paris Agreement, the Kingdom has developed an integrated strategy for low-carbon by 2050, the Head of Government said, adding that this strategy sets broad guidelines for economic sectors to reduce their carbon footprint through renewable energy.

Under the strategic and global vision of His Majesty the King, Morocco has established the 2020-2027 national program for the supply of drinking water and irrigation for a total cost of 11 billion dirhams, Akhannouch added.