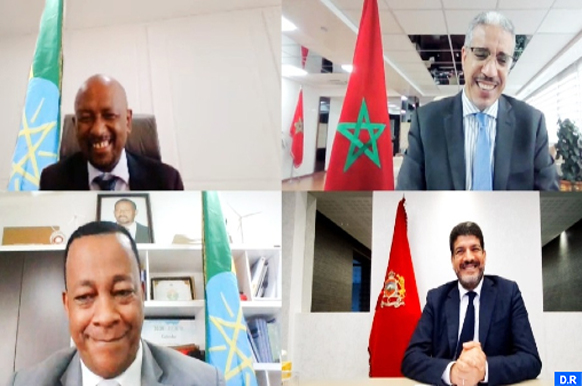 Rabat – Minister of Energy, Mining and Environment, Aziz Rabbah met recently by videoconference with Ethiopian minister of Water and Energy, Sileshi Bekele, as part of the proceedings of the Moroccan-Ethiopian Coalition for Sustainable Energy Access.

The talks, which took place in the presence of Frehiwot Woldehana, Ethiopian minister delegate for Energy and Mustapha Bakkoury, chairman and CEO of Masen, have focused on the progress of work to implement this coalition, said a statement by the ministry of Energy, Mining and Environment.

The two parties took note of the finalization of the draft governance and roadmap of the coalition, said the statement, adding that they also agreed to launch the phase of mobilization of strategic partners for the technical and legal implementation of the secretariat of the coalition and to work to mobilize the necessary funding by the end of the current year.

The detailed work plan for the year 2021 has, thus, been approved, said the same source.

At the end of this meeting, Rabbah and Bekele called on the technical teams of both parties to continue their work and consultations to hold the first meeting of the advisory board and launch the coalition as soon as possible, in anticipation of an effective launch of its legal structure on the sidelines of the high-level dialogue to be held in September in New York and the holding of the first operational activities on the occasion of the COP26 scheduled for November in Glasgow, the statement noted.

This coalition was announced at the Climate Action Summit in 2019, on the sidelines of the United Nations General Assembly. It aims to ensure general access to sustainable energy in the least developed countries and other developing countries, in accordance with the UN Agenda 2030.