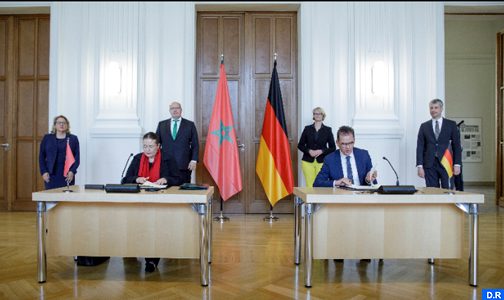 Berlin – Morocco and Germany signed an agreement, Wednesday in Berlin, on the development of the green hydrogen production sector.

The agreement was signed by Moroccan ambassador to Germany Zohour Alaoui and Federal Minister for Economic Cooperation and Development Gerd Müller, in the presence of German Minister for Economy Peter Altmaier, Minister of the Environment Svenja Schulze, Minister of Education and Research Anja Karliczek, and State Secretary at the Ministry of Transport and Digital Infrastructure.

Linking the Moroccan Ministry of Energy, Mining and Environment and the German Ministry of Economic Cooperation and Development, the agreement aims to develop the sector of green hydrogen production and to set up research and investment projects on the use of this source of ecological energy.

The first two projects, which have already been announced in the declaration of intent, will be implemented within the framework of economic cooperation between Morocco and Germany.

On this occasion, Zohour Alaoui highlighted the importance of the agreement for Morocco which enjoys, thanks to the Directives of HM King Mohammed VI, trust and credibility in the field of renewable energy.

The conclusion of this agreement testifies to the excellent relations uniting the two countries on the economic, political and cultural levels, underlined the ambassador in a statement to MAP, welcoming the fact that Morocco is the first country to sign an agreement of this kind with Germany just after the presentation of the German national strategy on hydrogen.

The agreement reflects the two countries’ firm desire to move forward in the development of renewable energy and their commitment to sustainable economic development while placing environmental protection as a priority, noted the Moroccan diplomat.

“We are convinced that the agreement signed with Germany is solid and will lead to concrete projects,” said Alaoui, adding that through this agreement, Morocco could set up the first production unit of hydrogen in Africa.

In a similar statement, German Minister for Economic Cooperation and Development Gerd Müller, said that this agreement will benefit from Morocco’s economic development dynamic, highlighting the Moroccan Green Plan which placed the Kingdom at the forefront in this area at the African level.