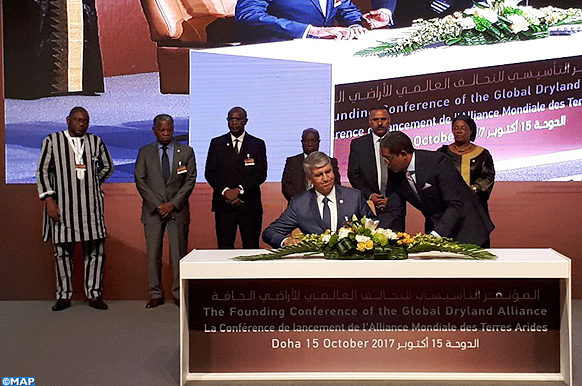 Doha  – Morocco and twelve other countries signed, Sunday in Doha, the foundation treaty of the Global Dryland Alliance (GDA).

The foundation treaty of the new organization was signed by the Secretary General of the ministry of agriculture, fisheries, rural development, water and forests, Mohamed Sadiki, in the presence of Morocco’s ambassador to Qatar, Nabil Zniber.

Speaking to MAP, Sadiki underlined the importance of Morocco’s participation in this founding conference, noting in this regard that two thirds of the Kingdom’s surface area is covered by arid and semi-arid lands.

The Kingdom will present its experience within the framework of this Alliance in the light of Morocco’s green plan, which has brought new instruments to achieve sustainable agricultural development while preserving the environment and biological diversity, he added.

Qatar will bankroll the operational budget of the GDA for two years and will also host its headquarters in Doha, Qatari Prime Minister and Interior Minister, Sheikh Abdullah bin Nasser Al-Khalifa Al Thani, said at the opening of this meeting.

The Alliance will work with local, regional, and international partners to identify, disseminate, and implement solutions for agricultural, water, and energy challenges of dryland countries.

According to the United Nations, drylands exist in 51 countries which are home to almost 3 billion people, a third of the world’s population.