​
newsAmbassador Hilale in Dushanbe: Morocco’s Water Security at Heart of its Sovereigns’ Concerns 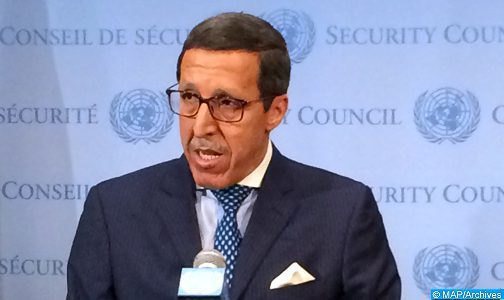 Ambassador Hilale in Dushanbe: Morocco’s Water Security at Heart of its Sovereigns’ Concerns

Dushanbe – Ambassador Omar Hilale, Permanent Representative of Morocco to the United Nations, stressed, in Dushanbe, that water security has always been at the heart of the Moroccan Sovereigns’ concerns.

“Thanks to the proactive policy on water, initiated in accordance with the enlightened royal vision of the late HM Hassan II and consolidated by His Majesty King Mohammed VI, the Kingdom of Morocco has engaged very early in a national policy of control and mobilization of water resources,” said Hilale during the general debate of the UN Conference of Dushanbe on water, held from June 6 to 9.

Aware of the economic, social and strategic issue that water represents, Morocco has equipped itself with more than 149 large dams, four large dams have been completed in 2021 and 15 others are under construction, three of which will be delivered this year,” he noted.

The speech of Hilale is part of the second international conference of the decade of action of water for sustainable development 2018-2028, organized by Tajikistan and the United Nations and co-chaired by the Prime Minister of the Republic of Tajikistan and the Under-Secretary-General of the United Nations for Economic and Social Affairs, which is attended by several heads of state and ministers.

On this occasion, the ambassador said that Morocco continues to invest in projects to adapt to climate change, especially to effectively manage water in agriculture, a sector that generates about 14% of gross domestic product and employs up to 40% of the workforce, adding that the Kingdom is accelerating its efforts to expand projects for desalination of seawater and reuse of purified wastewater.

Today, water is becoming an essential resource for public health, food security, energy, services, ecosystems, and as an important factor for sustainable development, this commodity is becoming a global challenge, the diplomat noted, noting that the competition for control of water resources will only increase in the future, due to the scarcity of water, hence the importance of strengthening international cooperation mechanisms to prevent future water-related conflicts and facilitate the use of water as a major factor for peace building.
“With a long and rich experience in water resources management, Morocco is one of the 15 founding countries of the Water Peace and Security Initiative, which aims to reflect on the issue of water and how to turn this vital commodity into a source of peace and not of conflict,” he said.

In addition, and as part of this international conference, Hilale participated as a panelist in an event dedicated to the Water-Energy-Food Security Nexus, organized by the International Water Management Institute, the Food and Agriculture Organization of the United Nations (FAO) and the German Federal Ministry of the Environment.

The panel focused on the interdependencies between water policies, energy transition and agricultural development in the post-COVID-19 era and in an international context marked by recent geopolitical tensions, as the international situation has indeed revealed the limits of international food systems and agri-food value chains.

“Every disruption the world experiences, whether related to a pandemic, armed conflict or the effects of climate change, illustrates the fragility of our food systems, and how easily they can be disrupted unless countries develop a real internal capacity to produce enough food locally and efficiently,” the ambassador noted.

These situations shed light on the central issue of food sovereignty of countries, which depend largely on their ability to preserve and efficiently use their natural resources, especially water and energy, he said.

Hilale recalled that Morocco was the host of the 1st World Water Forum, in Marrakech in 1997, noting that Morocco has continued to pay particular attention to the nexus water-agriculture.

“It is in this spirit that Morocco has created the King Hassan II Great World Water Prize, whose value has been increased from 100,000 to 500,000 USD, by the High Will of His Majesty King Mohammed VI, in order to reward distinguished initiatives and research works that develop new techniques for water security and climate justice,” added the ambassador.

He noted that Morocco has also created the Water Museum in Marrakech, on the initiative of His Majesty King Mohammed VI, to showcase the Moroccan water civilization and educate youth on the importance of water for sustainable development and for human survival itself.