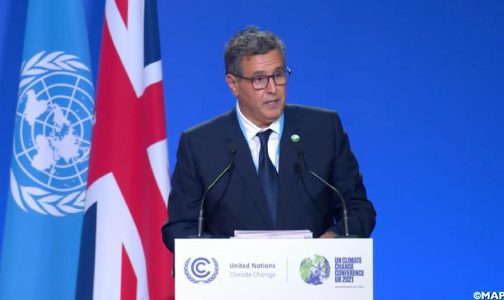 Rabat – The head of government, Aziz Akhannouch, on Tuesday took part in the Accelerating Clean Technology Innovation and Deployment Event at COP26.

Speaking on this occasion, Akhannouch said that the Research-Innovation and Energy sectors constitute strategic challenges for the future on which the New Development model of the Kingdom is based, stressing that the Moroccan commitment in the dynamic of energy transition represents a proactive political choice of the country, under the enlightened leadership of HM King Mohammed VI, says a press release from the department of the head of government.

The event, which was opened by British PM Boris Johnson, was attended by US President Joe Biden, Indian PM Narendra Modi, Kenyan President Uhuru Kenyatta and the President of the European Commission, Ursula von der Leyen.

Morocco is represented at the COP26 by a delegation led by Akhannouch and which includes Mohamed Sadiki, Minister of Agriculture, Fisheries, Rural Development, Water and Forests and Leila Benali, Minister of Energy Transition and Sustainable Development.

This summit is an opportunity for Morocco to present the ambitious policies and strategies that the Kingdom has successfully undertaken, under the leadership of HM King Mohammed VI, in order to consolidate the bases of sustainable development, encourage energy transition and support clean technologies, within the framework of strengthening Morocco’s effective contribution to international efforts in this area, in accordance with its international obligations.