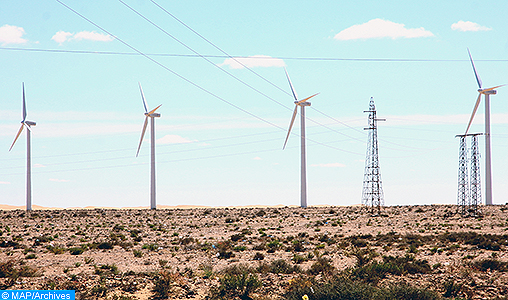 Dubai – Emirati media outlet “Sky News Arabia” highlighted, on its website, the Moroccan strategy to transition to clean energy, and the progress made in the production of renewable energy.

On the occasion of the organization of the Moroccan Economic Week at “Expo 2020 Dubai”, the media wrote that Morocco ranks first in the Middle East and North Africa region in the “Green Future” index published by the “MIT Technology Review”, which ranks 76 countries and territories according to their progress towards a green future by reducing carbon emissions, developing clean energy and innovating in green industries.

It recalled that Morocco has launched, since 2009, an energy strategy based primarily on the development of renewable energy and energy efficiency, and which aims to ensure its energy independence and contribute to the reduction of gas emissions, adding that in ten years, the projects developed under this strategy have increased the share of electricity production from renewable energy to 37%.

It explained that Morocco currently produces more than 4,000 megawatts of wind and solar energy, making it one of the advanced countries in this field at the continental and international levels, noting that the Kingdom relies on its natural resources, including its geographical position, in the production of clean energy.

In one of the sunniest cities in the south, the largest concentrated solar power plant in the world has been installed, and it is the Nour Ouarzazate plant that produces 580 megawatts and provides clean electricity to more than a million homes, the media wrote.

The Emirati media noted that Morocco is betting on reducing its dependence on imported fossil fuels, which account for 85% of its needs, with oil coming first, followed by coal and then gas.

It also recalled the speech of His Majesty King Mohammed VI on the occasion of the opening of the parliamentary session, in which the Sovereign stressed the need to achieve energy independence to strengthen the strategic security of the country.

The media concluded that Morocco has set clear targets, mainly to increase the contribution of renewable energy to the energy mix by 2030 to 52%.