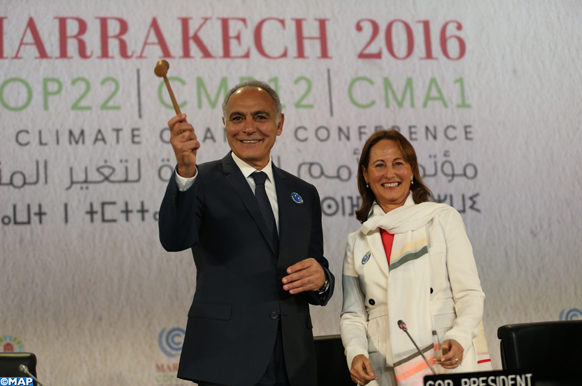 Marrakech 07/11/2016 (MAP) – Morocco has officially assumed the presidency of the 22nd Conference of the Parties to the UN Framework Convention on Climate Change (COP22).

At the opening ceremony of the COP 22 held Monday in Marrakech, COP21 president Segolene Royal handed over the presidency to Morocco’s foreign affairs minister Salaheddine Mezouar.

The COP 22, held in Marrakech until November 18, will focus on action items in order to achieve the priorities of The Paris Agreement, especially those related to adaptation, transparency, technology transfer, mitigation, capacity building and loss and damages.

The Conference will also be an opportunity to debate and discuss several issues relating in particular to agriculture, food security, energy, industry, transport and water.