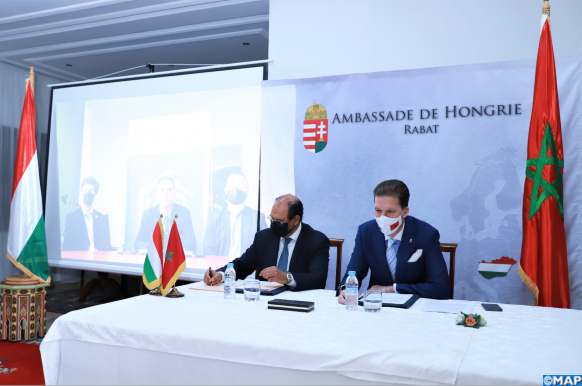 Rabat – A cooperation agreement was signed Tuesday between the National Center for Energy, Nuclear Science and Technology (CNESTEN) and the Hungarian Energy Research Center, with a view to strengthening cooperation between the two centers in the field of nuclear energy.

Signed by the CNESTEN Director General, Khalid El Mediouri, and his counterpart from the Hungarian Energy Research Center, Akos Horvath, this agreement is part of the interest given by the two institutions to scientific and technical cooperation and their common research, training and knowledge sharing objectives.

Under this agreement, the two parties agree to collaborate in areas of common interest, in particular through the exchange of research and students to benefit from advanced study courses and seminars, or to carry out required research. to complete their theses.

In accordance with the said agreement, the two institutions also undertake to exchange their staff, publications, scientific information and materials.

Cooperation between the two parties essentially touches on the use and application of research reactors as well as on the development of experiences in their use, according to the terms of the agreement.

It also concerns the production of radioisotopes used in industry, agriculture, medicine and other fields, as well as training and education.

This agreement “will further strengthen the cooperative relations between the two centers in the application of nuclear science and technology in various sectors, including the economic one,” El Medouri told MAP on the sidelines of the signing ceremony held in Rabat through video conference.

For his part, Hungary’s ambassador to Morocco, Miklós Tromler stressed that “cooperation with Morocco in the nuclear field is not new,” as several agreements have been signed, such as the 2017 agreement between the Moroccan Agency for Nuclear and Radiological Safety and Security (AMSSNuR) and its Hungarian counterpart.