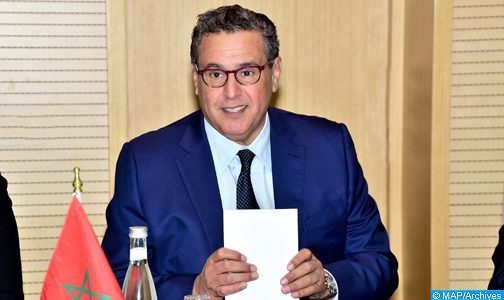 Brest (France) – The Head of Government, Aziz Akhannouch stressed, Friday in Brest, during the high-level segment of the first international summit on oceans “One Ocean Summit”, the efforts and progress made by Morocco in preserving fisheries resources and fighting against illegal fishing.

The efforts made by the Moroccan authorities have led in 95% of the resources fished in Morocco being under control with management plans, Akhannouch said during a panel entitled “Protecting and restoring marine ecosystems and promoting sustainable fisheries”, which was attended by the President of the United Republic of Tanzania, Samia Suluhu Hassan, the President of French Polynesia, Edouard Fritch and the President of the Republic of Ghana, Nana Akufo-Addo.

Morocco also ensures the traceability of these resources fished through agreements between the Kingdom and the European Union, said Akhannouch, who represents Morocco at this event at the head of a high-level delegation, including the Minister of Agriculture, Fisheries, Rural Development, Water and Forests, Mohamed Sadiki, and Morocco’s ambassador to the French Republic, Mohamed Benchaâboun.

On this occasion, the Head of Government highlighted, during this panel chaired by French President Emmanuel Macron, the “enormous progress” made by Morocco under the leadership of HM King Mohammed VI, thanks to the ‘Halieutis Plan’, particularly in the Atlantic.

As for the Mediterranean, which is a “shared sea”, Akhannouch stressed the “difficulties” related to the reproduction and recovery of resources, while underlining the need to take difficulties into account in the next process to provide the Mediterranean with a plan in this area.

In addition, he said that Morocco faces the major problem of plastic, through the enactment of laws prohibiting its use in certain sectors, noting that the Kingdom will continue to increase protected marine areas and strengthen the fight against illegal fishing.

Akhannouch also said that the international instrument for the conservation and use of biodiversity beyond national jurisdictions on the high seas, mentioned by the French President, is fundamental because it “can directly impact countries”.

In addition, in a statement to the press, the Head of Government highlighted the importance of scientific research, which remains a “fundamental” element to know the seabed and be able to achieve development plans for the preservation of the oceans, welcoming, in this regard, the efforts made by Morocco in this area.

The “One Ocean Summit” is held in the context of the French Presidency of the Council of the European Union, with the support of the United Nations.

The event seeks to raise the collective level of ambition of the international community on marine issues and to translate our shared responsibility to the ocean into tangible commitments.

Several important initiatives will be launched on this occasion in favour of marine ecosystem protection and sustainable fisheries, intended to fight pollution, in particular from plastics, respond to the impacts of climate change, as well as advocate for improved governance of the oceans.