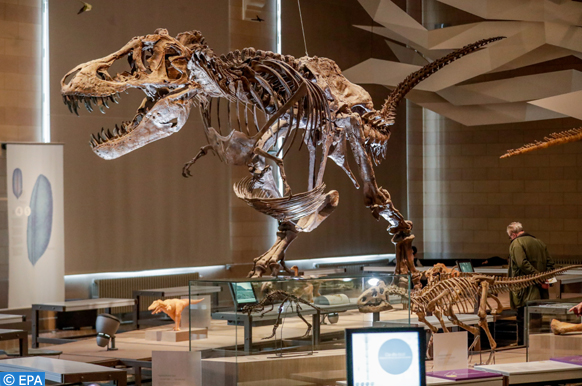 Paris – An international research team has just highlighted, for the first time in Africa, the presence of a new species of dinosaur in the phosphate deposits of Morocco, a discovery which enriches knowledge on paleo-biodiversity and sheds light on the importance of paleontological data from Morocco.

The discovery of the new fossil in a mine a few hours from Casablanca was “about the last thing in the world you would expect,” said Dr Nicholas Longrich, of the Milner Centre for Evolution at the University of Bath, who led the study published in Cretaceous Research.

According to the research, study of Ajnabia’s distinctive teeth and jawbones show it belonged to Lambeosaurinae, a subfamily of duckbills with elaborate bony head crests. Lambeosaurs evolved in North America before spreading to Asia and Europe, but have never been found in Africa before.

Reconstructing duckbill evolution, the team found the lambeosaurs evolved in North America, then spread over a land bridge to Asia. From there, they colonised Europe, and finally Africa.

In reference to this feat, the dinosaur is named “Ajnabia odysseus.” Ajnabi being Arabic for “foreigner,” and Odysseus referring to the Greek seafarer.

The fact that duckbills and other dinosaur groups spread between continents, even with high sea levels, suggests dinosaurs traveled across oceans as well. “As far as I know, we’re the first to suggest ocean crossings for dinosaurs,” said Longrich.

Dr Nour-Eddine Jalil, from the Natural History Museum of Sorbonne University (France) said: “The succession of improbable events (crossing an ocean by a dinosaur, fossilization of a terrestrial animal in a marine environment) highlights the rarity of our find and therefore its importance.