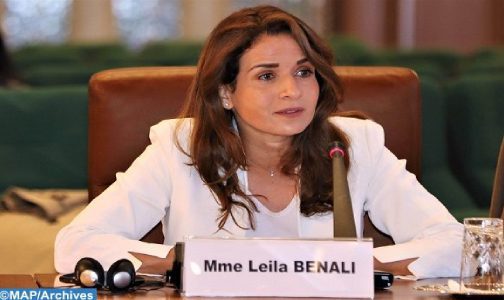 Stockholm -The Minister of Energy Transition and Sustainable Development, Leila Benali, highlighted the African priorities in terms of climate and environmental action, as part of her participation in the work of the international meeting Stockholm +50, held on 02 and 03 June in Stockholm.

Benali, who delivered a speech on behalf of the “African Group”, stressed that Africa needs better access and greater efficiency of financial flows to cope with climate change, both for mitigation and adaptation, mentioning in this regard, the quote of the UN’s Secretary General on “the reform of the bureaucracy,” said the Ministry of Energy Transition and Sustainable Development in a statement, received, Friday, by MAP.

Recalling that the contributions determined at the national level of African countries must be translated into a portfolio of bankable projects to attract large-scale investment, especially from the private sector, the minister called for an improvement in budgetary policies and stressed the need to support African countries in their plans for fair and sustainable transition.

Benali also noted that the “African Group” has launched many regional initiatives, including the initiative for renewable energy in Africa, the Great Green Wall for the Sahara, the Sahel and Southern Africa, as well as the initiative for the adaptation of African agriculture and called, on this occasion, for support to implement these initiatives and to provide them with rapid access to funding in order to enable African countries to address the factors of desertification, land degradation and drought.

Referring to the major socio-economic importance of the agriculture sector in the continent, the Minister underlined the need to strengthen strategic partnerships involving the private sector and international financial institutions in order to increase financing opportunities for African smallholder farmers and strengthen their resilience.

In addition, the minister noted that bridging the digital divide and improving health systems can increase productivity and create more opportunities for women and youth, potentially lifting more than 60 million people out of poverty.