​
InitiativesSurinamese FM Interested in Morocco’s Experience in Area of Environment 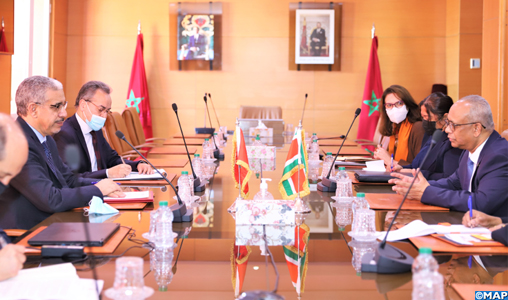 Surinamese FM Interested in Morocco’s Experience in Area of Environment

Rabat – Suriname’s Minister of Foreign Affairs, Trade and International Cooperation, Albert Ramdin, said he was particularly interested in the experience of Morocco in the field of environment.

“We hope to have a technical cooperation in the future (…), especially in the area environment, but also to develop the mining and energy sector,” Ramdin told M24, MAP’s News Channel, following talks, Thursday in Rabat, with Minister of Energy, Mining and the Environment, Aziz Rabbah.

“It is very important for us, because we are the second country in the world in terms of forest cover, so we have much to protect,” he explained, stressing that his country can draw on Morocco’s experience in this area.

Ramdin was also impressed by the strategic thinking of the Ministry of Energy, Mining and the Environment and by Morocco’s experience in the field of mining and the environment.

In similar remarks, Rabbah said his talks with the Surinamese official touched on cooperation in energy, mining and the environment.

“Suriname believes that Morocco can be a hub to Africa and Europe,” he stated, adding that this country “can play a very important role in connecting Latin America and our country, in all areas.”

Praising the development of bilateral relations, especially at the political and diplomatic levels, Rabbah affirmed that both countries will increase their efforts in other areas, especially economy..

Morocco’s new orientation is to strengthen its political relations and develop them to encompass other economic and social areas, he noted.

During these talks, Rabbah highlighted the opportunities that Morocco can offer as well as the Kingdom’s investments in the field of phosphates, especially in the fertilizer sector.

He also stressed Morocco’s geo-strategic position which enables the Kingdom to ensure a sea and air connection, especially with remote destinations.

At the end of the meeting, the two officials agreed to hold virtual meetings to continue discussions on bilateral cooperation.