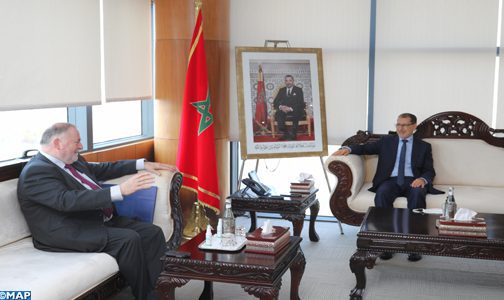 Rabat – The president of the World Water Council, Loïc Fauchon, welcomed, Wednesday in Rabat, the achievements made by Morocco for decades in the field of mobilization, preservation and development of water resources.

Fauchon, visiting Morocco as part of the preparations for the 9th World Water Forum, scheduled for March 2022 in Dakar, also welcomed, during his meeting with the head of government Saad Dine El Otmani, the Kingdom’s involvement in the development of new technologies for the desalination of seawater and the reuse of wastewater, making it one of the world’s leaders in terms of supplying its population and regarding its national water economy, said a press release from the Head of Government’s department.

The President of the World Water Council underlined that the awarding of the Hassan II International Grand Prize, considered one of the greatest awards in the field of water management, constitutes an exceptional step for each edition of the Forum, since it makes it possible to spread information about the great advances made by the Kingdom in this field.

He expressed his willingness to cooperate with the Moroccan authorities concerned to ensure all the conditions for the success of the next edition of this remarkable event, within the framework of the 9th edition of the World Water Forum, which will be attended by representatives of 70 countries, in addition to a large number of UN agencies, civil society organizations and scientific and other personalities.

On this occasion, the head of government recalled the significant efforts made by Morocco for the mobilization, development and preservation of water resources, within the framework of the wise royal policy in the matter which fosters the achievements made by the Kingdom thanks to the insightful vision of the late HM Hassan II, added the press release.

El Otmani also reviewed with his guest the main components of the National Water Plan (2020-2050), which constitutes a roadmap to face future challenges in the water sector, as well as the National Drinking Water Supply and Irrigation Program (2020-2027), through which the Kingdom will work in particular to build 15 dams over the next three years, in addition to the continuation and strengthening of ongoing programs relating to building seawater desalination and wastewater treatment plants, in addition to training and awareness-raising programs.