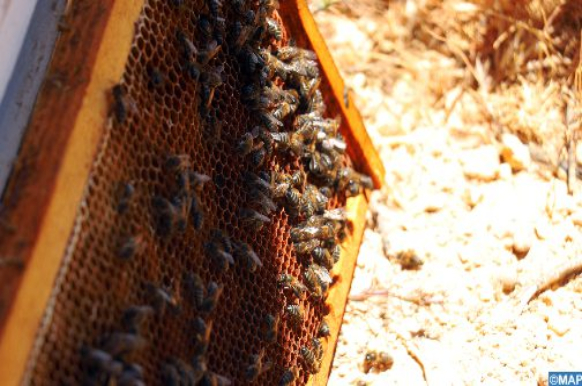 Rabat – A special program has been developed to support beekeepers affected by the phenomenon of disappearance of bee colonies, noted recently in some regions, announced Sunday the Ministry of Agriculture, Fisheries, Rural Development and Water and Forestry.

Thus, the government allocates an amount of 130 million dirhams to take immediate measures through the support of beekeepers for the reconstruction of infected hives by distributing new colonies of bees and the establishment of a national campaign to treat hives against varroasis disease as well as awareness campaigns for the benefit of beekeepers, especially with regard to good practices in beekeeping, said the ministry in a statement.

Indeed, a working session was held Saturday via videoconference, by the head of government and the Minister of Agriculture, Fisheries, Rural Development and Water and Forests, accompanied by the Director General of the National Office of Food Safety (ONSSA) and the central director of production channels to examine the causes of this phenomenon and ways to mitigate its effects on the beekeeping sector.

During this meeting, the Director General of ONSSA made a presentation on the urgent measures taken as well as the preliminary results of research and analysis carried out by its regional veterinary services, in collaboration with representatives of the Moroccan Interprofessional Federation of Beekeeping, and which have shown that this phenomenon is new and concerns some beekeepers to varying degrees in some regions of Morocco.

Also, laboratory investigations exclude the hypothesis that a bee disease is the cause of this phenomenon, noted the statement.

The ONSSA has formed a committee of multidisciplinary experts to continue research and studies on this phenomenon, the statement said, noting that the Office also deepens the field surveys in collaboration with professionals in the sector to identify factors contributing to the development of this phenomenon.

The phenomenon known as “Bee Colony Collapse Disorder” has also been observed in countries in Europe, America and Africa.

The research attributes this to several factors, among others, the low rainfall, the decrease in the quantity and quality of food available for bees or the health status of the apiaries and the prevention methods followed, the statement concluded.