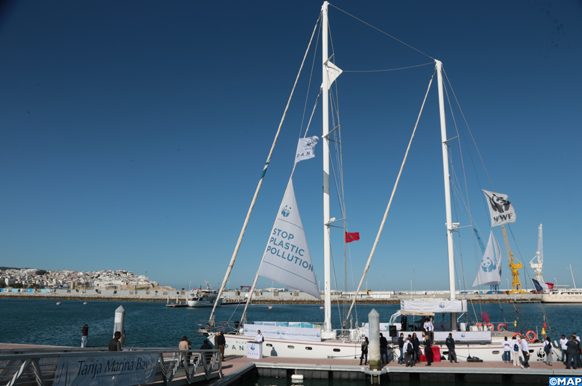 Tangier – The sailboat “Blue panda” of the international NGO WWF made a stopover on Saturday at the Tangier Marina, after touring the coasts of France, Italy, Greece, Turkey and Tunisia.

The 26-metre-long sailboat has made its stops in ports and marinas to raise awareness of the issue of marine biodiversity in the Mediterranean and the impacts of pollution on this wealth.

In a statement to MAP, director of WWF Morocco, Yosra Madani said that the expedition of the sailboat “Blue panda”, which started last May from France, aims to encourage cities in the Mediterranean basin particularly to set targets to stem the flow of plastic waste in nature by 2030.

“Agreements with local authorities have been signed as part of WWF’s “Plastic Smart Cities” initiative to encourage cities around the world to reduce plastic pollution,” she said.

For his part, the maritime expedition manager and captain of the boat, Stéphane Mingueneau, highlighted the importance of this expedition, which helped to study and analyze, as well as to testify to the large quantity of plastic pollution in the Mediterranean Sea.

“More than 600,000 tons of plastic are thrown into the sea every year and its use not only damages marine life but also human beings,” he said.

On this occasion, a Declaration of intent was signed between the city of Tangier and WWF aimed at making Tangier a smart city with zero plastic pollution by 2030.