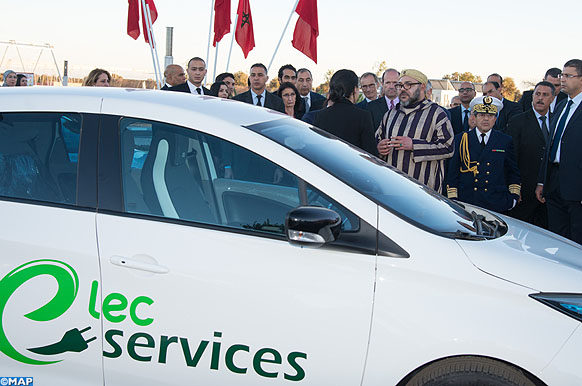 Benguerir – HM King Mohammed VI inaugurated, on Thursday in the Green City of Benguerir, the international platform for test, research and training in solar energy “Green Energy Park”, a first in Africa that will pool resources, create synergies and position Morocco as a leader in innovation in the field of renewable energies.

Worth more than 210 million dirhams, this project mirrors the Sovereign’s particular interest in the development of scientific research, as well as His willingness to optimize the exploitation of Morocco’s natural resources, preserve its environment, sustain its economic and social development, and secure the future of coming generations.

This platform, developed by the Institute of Research in Solar and Renewable Energies (IRESEN), conducts research on priority topics that cover all the phases of the value chain of research and development, from the core component to the complex systems, in order to meet national and African needs.

In fact, topics such as the treatment and desalination of water by using solar energy, the development of desert modules, the design of innovative thermal and electrical storage solutions and the development of industrial applications of solar thermal energy constitute the major concerns of the “Green Energy Park”.

Built on a an area of 8 hectares, the “Green Energy Park” has an internal research platform of more than 3,000 square meters, which includes several laboratories in the field of solar photovoltaic and thermal energies.

On this occasion, the director general of the Institute of Research in Solar and Renewable Energies handed the Sovereign the first African thin-film photovoltaic cell, produced by a plasma chemical vapor deposition method in the “Green Energy Park”.

Subsequently, HM the King handed local associations the keys of four electric cars, acquired as part of an ambitious program aimed at analyzing the main obstacles to the development of electric transport in Morocco.