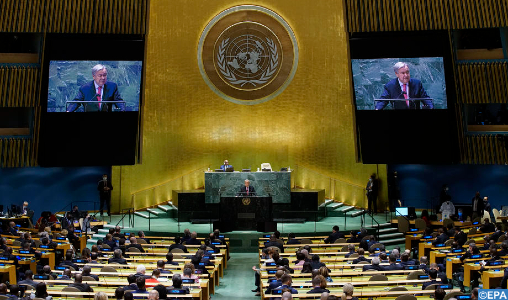 United Nations (New York) – Over the past two decades, Morocco has engaged in structural reforms under the leadership of HM King Mohammed VI to achieve its economic, social and green goals, by placing the human component at the heart of all its public policies, Minister of National Territorial Planning, Urban Planning, Housing and Urban Policy, Fatima Ezzahra El Mansouri, said Thursday in New York.
Speaking at the high-level meeting on the implementation of the New Urban Agenda, held at the initiative of the United Nations General Assembly, El Mansouri stressed that the Kingdom has undertaken major infrastructure projects, under a far-sighted Royal vision, and achieved remarkable social, economic, green and institutional progress, by choosing to place the Human at the heart of all its public policies.
In that regard, she mentioned flagship projects such as the Tangier MED Port, the High-Speed Railway linking Tangier to Casablanca, and the Noor Ouarzazate solar power plant.
In accordance with the commitments made to the international community, Morocco has prepared and published its first national report on the implementation of the New Urban Agenda, the official recalled.
The minister also pointed out that under the 2011 Constitution, Morocco has embarked on a project of advanced regionalization which aims to achieve harmonious economic development in all regions. Regional plans for land use have been developed to define the general framework of public policies converged, and adapted to each region, she added.
According to the official, Morocco has revised its development model to align it with developments in the country and the world, in compliance with the high instructions of His Majesty King Mohammed VI.
This model, which outlines a road to achieving sustainable development by 2035, aims to ensure inclusion, sustainability, and regional leadership, she explained.
The guidelines of the new development model provide appropriate responses to the expectations of citizens and territories impacted by the effects of climate change and Covid-19, a crisis that Morocco has been able to manage with courage, boldness and anticipation through preventive emergency measures, El Mansouri said.
The Kingdom has set as a goal the promotion of urban and sustainable development through the implementation of a new model of spatial planning fostering a prospective understanding of the territories by 2050, she added.
On the issue of housing, El Mansouri said that Morocco has implemented over the past two decades State-supported programs (Cities without slums, conventional programs of social housing …), to facilitate access to decent housing with a view to improving the living environment of citizens.
She also pointed out that the Kingdom has undertaken a broad program of preservation of its heritage through the rehabilitation and safeguarding of medinas, Ksour and Kasbahs. Morocco has also established a comprehensive program of digital transformation of cities and functional urban areas, the minister added.
“As a member of the Executive Board of UN-Habitat, the Kingdom will further strengthen its cooperation with all member states and stakeholders of the New Urban Agenda, especially in our African region,” El Mansouri underlined.
The High-level Meeting on the Implementation of the New Urban Agenda seeks to assess the progress in the implementation of the New Urban Agenda and facilitate an ongoing exchange of experiences among the Member States, Local and Regional Governments, and other constituencies of the New Urban Agenda such as professional associations, grassroots organizations, and business leaders.
The New Urban Agenda was adopted at the United Nations Conference on Housing and Sustainable Urban Development (Habitat III) in Quito, Ecuador, on 20 October 2016. It was endorsed by the United Nations General Assembly at its sixty-eighth plenary meeting of the seventy-first session on 23 December 2016.