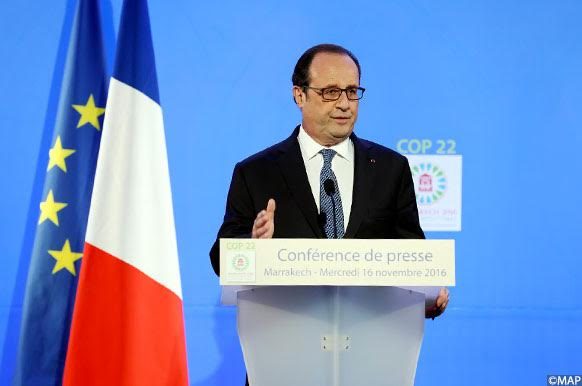 Antananarivo, 26/11/2016 (MAP) – French President François Hollande welcomed, here Saturday, the success of the 22nd Conference of the Parties to the United Nations Framework Convention on Climate Change (COP22), Held on November 7-18 in Marrakech.

Speaking at the opening ceremony of the 16th Francophonie Summit, Hollande also welcomed France’s role in hosting COP21 in Paris, which was subsequently resumed by Morocco.

Expressing the mobilization for the Francophone space, the French president called for strengthening cooperation against radicalization in this space.

“France supports the establishment of a francophonie network against radicalization to exchange information, share effective practices and implement programs wherever necessary”, he added.

Held under the theme “Shared Growth and Responsible Development: Conditions for Stability Around the World and within the Francophonie”, the 16th Summit of Francophonie kicked off Saturday in Antananarivo with the participation of Minister of Foreign Affairs and Cooperation, Salaheddine Mezouar, representing HM King Mohammed VI.

The Summit will review themes related to crisis and consolidation of peace in the Francophone world, the promotion of gender equality, the empowerment of women and girls, the prevention of extremism, and the vocational and technical training.

Energy, the promotion of linguistic diversity, the situation of children, local development, environment, dialogue between cultures as a factor of sustainable development, road safety and the blue economy are also on the agenda of this event.