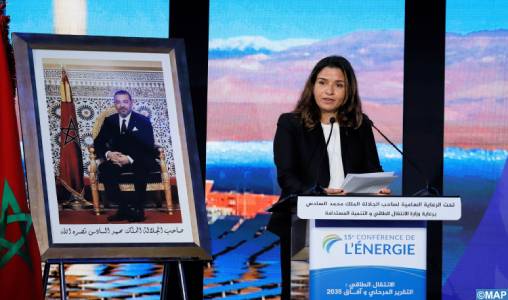 Rabat – The 15th energy conference opened Monday in Rabat, under the theme “Energy transition: progress report and prospects for 2035”.

Organized under the High Patronage of HM King Mohammed VI by the Energy Federation with the support of the Ministry of Energy Transition and Sustainable Development, the event sees the participation of the United Arab Emirates as guest of honour.

The event brings together Moroccan and foreign institutional personalities to discuss the future prospects of a highly strategic sector.

The aim is to take stock of the new energy demand, taking into account the health crisis and its repercussions on the economy on a national, continental and international scale.

The conference will focus on several themes which will be debated in 4 panels, in particular the acceleration of the deployment of renewable energies, the introduction of natural gas as a vector of competitiveness for national industry, hydrogen and the decarbonization of industry.

The conference will also allow to exchange on the experiences of Morocco and the United Arab Emirates in terms of renewable energies. It is also a step in the dynamics of strengthening cooperation and developing partnerships between the two countries.

It is also an opportunity to give proposals likely to contribute to the development of a renewed national energy strategy.