​
newsHM the King’s Participation in One Planet Summit Highly Applauded 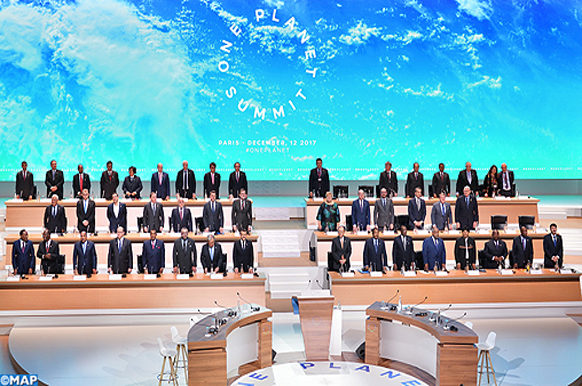 HM the King’s Participation in One Planet Summit Highly Applauded

Paris, 12/12/2017 (MAP) – The participation of HM King Mohammed VI, accompanied by HRH Crown Prince Moulay El Hassan, in the One Planet Summit and the sovereign’s leadership for sustainable development in the African continent were highly applauded, Tuesday in Paris, at the opening of this global event.

“We thank HM King Mohammed VI who proved, through his presence in this opening session, his commitment to the climate cause via the organization of the COP22, his leadership for sustainable development in the African continent and an ambitious program for renewable energy development,” said the moderator of the opening session in the presence of French president Emmanuel Macron, UNSG Antonio Guterres and president of the World Bank Jim Yong Kim, as well as attending heads of state and delegation.

HM the King shows just how the climate issue is universal and involves all countries north and south, said the moderator.

He also underlined that the presence of HRH Crown Prince Moulay El Hassan is a strong signal of youth’s involvement to defend the future of the planet.