​
InitiativesIssue of Drinking Water Supply and Irrigation is ‘vital and Being Taken Seriously’ (Govt. Chief) 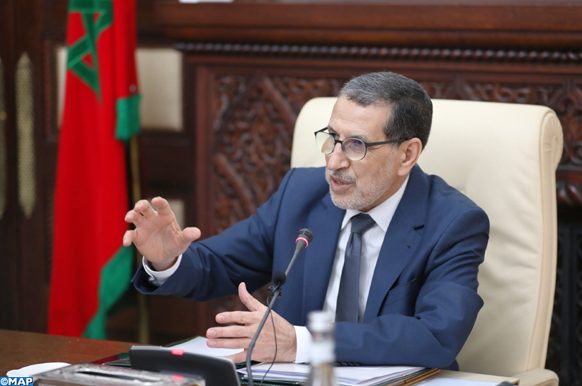 Issue of Drinking Water Supply and Irrigation is ‘vital and Being Taken Seriously’ (Govt. Chief)

Rabat – The issue of drinking water supply is being taken very seriously, and the necessary financial resources are mobilized for the implementation of the National Priority Program for Drinking Water Supply and Irrigation 2020-2027, said, Thursday in Rabat, head of government, Saâd Dine El Otmani.

Speaking at the opening of the weekly Cabinet meeting, El Otmani recalled the working session chaired last Tuesday by HM King Mohammed VI, which was devoted to this priority Program, stressing the interest granted by the Sovereign to this “vital” issue.

The priority program will ensure that drinking and irrigation water needs will be guaranteed according to a clear vision stretching from 2020 to 2027, he noted, estimating that this ambitious program presented and approved before the Sovereign will increase the number of large dams from 145 to 179.

With regard to small dams and hill dams, the head of government said that their number will also increase, given their importance, particularly for the inhabitants of remote mountainous and rural areas, stressing in this context the role of these reservoirs in storing rainwater.

On this occasion, the head of government recalled the five axes on which the priority program is based and which consist mainly in the development of water supply through the continuation of the policy of construction of dams and desalination of sea water, announcing, in this sense, the opening of three large desalination plants in the years to come.