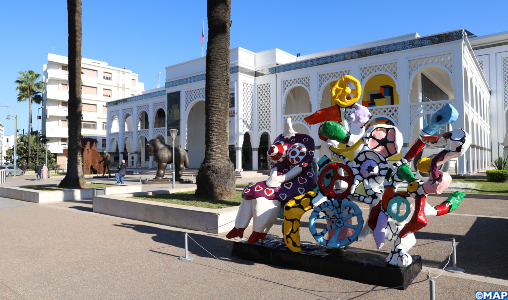 Rabat – The Mohammed VI Museum of Modern and Contemporary Art (MMVI) is now the first museum in Africa to produce electricity using a photovoltaic installation.

The symbolic kickoff of this initiative was given on Wednesday in Rabat by the president of the National Museum Foundation (FNM), Mehdi Qotbi, and the Director General of the Research Institute for Solar Energy and New Energies (IRESEN), Badr Ikken.

Launched at the Mohammed VI Museum of Modern and Contemporary Art (MMVI), this initiative is part of the strict respect of the firm commitment of His Majesty King Mohammed VI in fighting against climate change and his call to an awakening of global consciousness and a responsible collective commitment to face climate change in order to ensure a better future for all humanity.

Speaking to reporters, IRESEN Director General said that the launch of this project is of particular importance because it reflects “the commitment of culture in favor of the preservation of the environment and of the planet”.

“This technological solution could be used in the other museums of the Kingdom,” he pointed out, adding that the MMVI is the first museum to use solar energy and a storage system (of batteries) at the continental level.

This project, which will ultimately reduce the energy bill by more than 50%, could be used in other public administrations at the national and continental level, he added.

The FNM, together with IRESEN and its international research platform Green Energy Park, signed a partnership agreement in October 2020 to develop an innovative model of energy production and management at the MMVI.

Thus, a new real-time supervision system, taking into account the conservation requirements of artworks, was developed, allowing automatic control of these various parameters and consequently optimizing the energy consumption of energy-intensive terminals.

The ceremony took place in the presence of the director of the Mohammed VI Museum of Modern and Contemporary Art, Abdelaziz El Idrissi, as well as representatives of the media and personalities from the world of art.