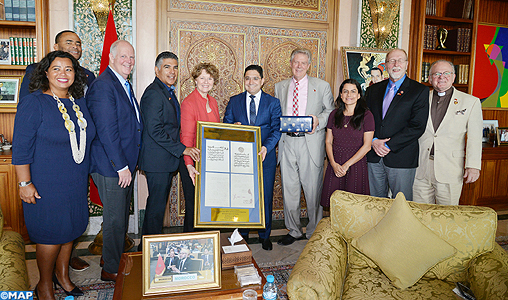 Rabat – U.S. congressman Frank Pallone, Chairman of the Energy and Commerce Committee, said he was impressed by Morocco’s great progress in renewable energies, expressing the wish to develop cooperation between the United States and Morocco in this area.
Morocco has made significant progress in the area of renewable energies, Pallone told reporters following talks Monday in Rabat between a delegation of U.S. congressmen and Morocco’s Minister of Foreign Affairs and International Cooperation, Nasser Bourita.
“Yesterday, we went to the Ministry of Energy, and we were very impressed because Morocco produces more than 30% of its energy from renewable sources such as solar and wind power,” he said, adding that his country wishes to develop its cooperation with Morocco in this area.
Talks with Mr. Bourita were an opportunity to discuss the means to step up bilateral military and trade cooperation, Pallone pointed out.
The congressman recalled, in this regard, that Morocco is the only African country to sign a Free Trade Agreement with the United States, noting that the Kingdom is a powerful ally of the United States.