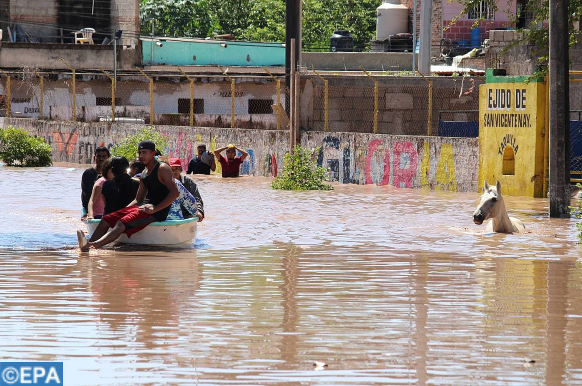 Geneva – Over 57 million people in the Asia-Pacific region suffered from climate-related disasters in 2021, the catastrophic effects of which are accompanied by the impacts of the COVID-19 pandemic, the International Federation of Red Cross and Red Crescent Societies (IFRC) said Wednesday.

“Asia and the Pacific have experienced relentless and unpredictable climate-related disasters in 2021, severely affecting more than 57 million people during the peak of the global pandemic”, the IFRC noted in a statement.

“South Asia was the most adversely affected region with millions of people experiencing successive natural catastrophes​​​. In Indonesia, over one million people suffered from floods in the past month alone”, according to the same source.

In India, more than 18 million people were hit by floods and cyclones in 2021, the statement added.

In the Chinese province of Henan, 13.9 million people were affected by heavy rains and floods in July alone. The inhabitants of Bangladesh and Nepal also suffered unpredictable floods and landslides in 2021, many of them losing their homes.

“Other countries across Asia have also been hit by multiple disasters. Nearly one million people were swamped by flooding in Thailand, more than half a million people affected by floods and typhoons in the Philippines and over 125,000 people hit by floods in Myanmar”, according to the IFRC.

Drought, which is exacerbated by economic collapse and the COVID-19 pandemic, is currently affecting over 22.8 million people in Afghanistan.

“As risks mount with climate change, the IFRC is investing in anticipatory early warning systems to better prepare communities to act before disasters strike, to reduce the loss of lives and livelihoods,” IFRC Emergency Operations Manager, Jessica Letch, said in the press release.

The IFRC launched 15 new climate-related disaster responses in 2021, according to the statement.