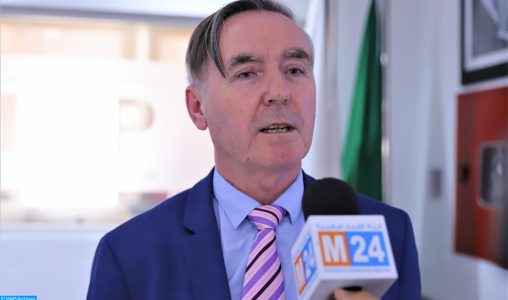 Rabat – Australia’s Ambassador to Morocco Michael Cutts, on Tuesday, praised the Kingdom’s efforts in the area of climate change.

“We commend Morocco’s efforts in this area, such as its National Climate Plan 2020-2030 (NCP), which aims to establish the fundamentals of a low-carbon and climate-resilient development,” Cutts wrote in an Op-Ed.

The diplomat mentioned the Nationally Determined Contributions (NDC), consisting of 55 actions aimed at reducing greenhouse gas emissions by 42% by 2030.

He also highlighted Noor Ouarzazate, one of the largest solar parks in the world, which contributes to Africa’s energy transition and now supplies nearly two million Moroccans with electricity, while preventing the release of nearly one million tons of greenhouse gas per year.

As for Australia, which aims to become carbon neutral as soon as possible, the ambassador spoke of the implementation of an investment plan to raise nearly 45 billion Euros in low-carbon technologies by 2030, with a focus on hydrogen, carbon capture and storage, as well as energy storage.

“Our goal is to make these technologies as economically competitive as their more polluting counterparts. Science teaches us that even with the most ambitious emissions reductions, we will need to adapt to changes in our climate in the coming decades,” the diplomat highlighted.

According to the diplomat, “concrete actions are needed to adapt and make our environment more resilient to these changes. Alongside Morocco and all our partners, we will get there.”

“For Australians, 2020 started with the most devastating bushfires in our history. The whole world came to our aid: more than 300 foreign firefighters came to fight the flames with us. While cutting emissions will remain a necessity, additional efforts will be needed to adapt and protect us from climate change,” Cutts wrote.

“The Climate Change Adaptation Summit, hosted by the Netherlands on January 25, provided an opportunity for Australia to reaffirm its commitment to ambitious and concrete actions to combat the effects of climate change at home, in our region and globally,” he added.

Australia is the driest inhabited continent in the world and home to the richest biodiversity on the planet and the oldest surviving human cultures.

Recent bushfires have shown the importance of the traditional techniques of the Aboriginal and indigenous populations of the Torres Strait, such as cool-burning and controlled fires, used alongside modern approaches, the diplomat observed.

Aware that climate change is the biggest long-term threat to coral reefs, Australia will invest more than €1.7 billion to protect the Great Barrier Reef.

“On a global scale, Australia has pledged to contribute nearly €1 billion to green funds between 2020 and 2025, particularly to help its Pacific neighbors deploy renewable energy and protect themselves against climate change,” according to the diplomat.

“Of course, these adaptation measures must go hand in hand with emission reductions. Australia is on board: we remain firmly committed to the Paris Accord, and we are on track to meet or exceed our 2030 target, with a reduction in emissions of nearly 17% since 2005,” he added.

Australians are at the forefront of renewable energy: nearly one in four Australian households is equipped with solar panels (the highest rate in the world), and we are building solar and wind power equipment, Cutts concluded.