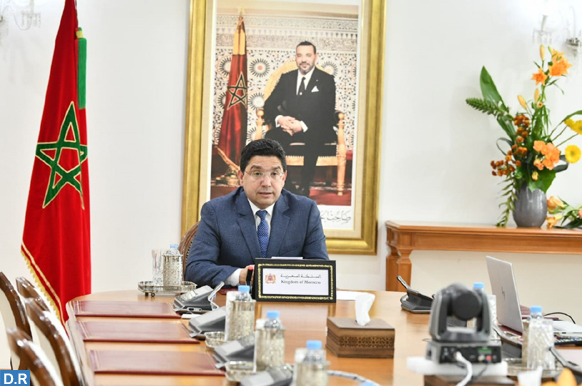 Rabat – Minister of Foreign Affairs, African Cooperation and Moroccans abroad, Nasser Bourita, Called on Wednesday for a new collective financing target for after 2025 to back common efforts in terms of climate action.

“Providing a new collective financing target for after 2025 will be a strong and concrete signal to support our common efforts and preserve the credibility and sustainability of climate action,” the minister said in an address at the Climate and Development Ministerial meeting, held virtually by the United Kingdom, host of the 26th UN Climate Change Conference of the Parties (COP 26) in Glasgow, due on November 1-12, 2021.

According to Bourita, “today, and in a context burdened by the impacts of the Covid-19 pandemic, there is, more than ever, an urgent need for measures in line with the 2030 Agenda for sustainable development and for systemic change in the funding decisions which have the most significant impact.”

These measures, he said, “should be new, additional, innovative, adequate and predictable to take into account major challenges and allow more ambitious national plans.

“Access to finance must also be equally fair and equitable for all developing countries,” Morocco’s top diplomat stated, adding that these measures should also “integrate, in an inclusive approach, a vast mobilization of the private sector whose commitment remains crucial for a transition to a low carbon economy.”

“We must also ensure a balance between mitigation and adaptation financing,” the minister added.

On the response to climate change in Africa, Bourita noted that “under the current response framework, Africa is not treated as an equal partner. Our continent is subjected to several inequalities.”

“Inequalities in the responsibilities as our continent which emits the least greenhouse gases is the most heavily impacted by climate change; Inequalities related to expertise capacity, technological solutions, anticipation and repair; and Inequalities in financial resources to implement policies and strategies in line with the commitments supported by the African countries,” he deplored.

The Minister highlighted Morocco’s strong commitment to the international climate agenda, which is first translated in an ambitious NDC (nationally determined contributions) of 42% of greenhouse gas emissions reduction by 2030.

“Morocco has also launched a process of increasing its NDCs, which, with the “Morocco 2050 vision” for a long-term low greenhouse gas emission development strategy will help achieve our objectives just on time for COP26,” Bourita added.

Speaking of Morocco’s commitment to its continent, the FM recalled that the first African Action Summit organized during the Moroccan Presidency of the COP22 in Marrakesh, at the initiative of His Majesty King Mohammed VI, marked a new African climate action era to bring concrete responses to the alarming impacts of climate change in our region.

Morocco helped set up and operationalize the three African Climate Commissions decided then, for the Congo Basin, the Sahel region and island states, Bourita added.

“We also launched then the implementation of 100% African initiatives including the ‘Sustainability, Stability and Security’ initiative and the ‘Adaptation of African Agriculture initiatives’ which are prominent and promising examples of that continental work.”

“Morocco’s efforts to promote universal solutions are also reflected in the universal access to sustainable energy and the climate hub for African youth initiatives, both launched during the Climate Action Summit in 2019,” he concluded.

The Climate and Development Ministerial meeting brought together ministers and stakeholders to identify practical next steps on a series of priority issues for climate-vulnerable communities ahead of the COP26, namely access to climate finance, responding to the impacts of climate change, quality and composition of climate finance as well as fiscal space and debt sustainability.

Several institutions also took part in the meeting, namely the African Development Bank, the European Bank for Reconstruction and Development, the Global Environment Facility, the International Monetary Fund, the Green Climate Fund and the World Bank.