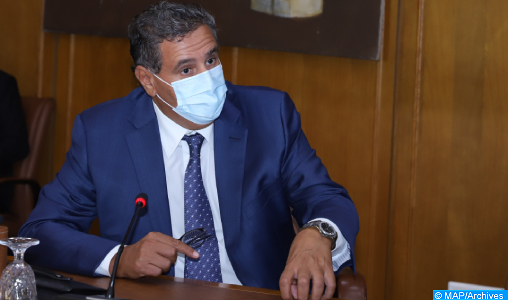 Glasgow – The Royal Speech, addressed to the participants in the United Nations Conference of the Parties on Climate Change (COP26), emphasizes world leaders’ responsibility towards humanity, the Head of Government, Aziz Akhannouch, said on Monday.

This requires a clear political commitment, he said, affirming that, in this respect, the Kingdom has launched multiple programs in the fields of energy, agriculture and water. These projects, which benefit from HM King Mohammed VI’s High Solicitude, allow Morocco to be a leader in fighting climate change, he stressed.

In addition, he noted that that COP26’s main ambition is to strengthen collective action to reach carbon neutrality in 2050, so as to achieve the +1.5°C objective. In the same respect, it also aims to mobilize the necessary funds to ensure the planet’s energy transition

Morocco is represented by a delegation led by the Head of Government and composed of Mohamed Sadiki, Minister of Agriculture, Fisheries, Rural Development, Water Bodies and Forests, and Leila Benali, Minister of Energy Transition and Sustainable Development.