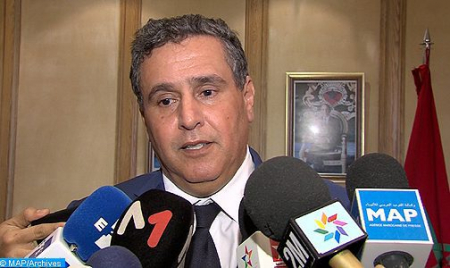 Rabat – The framework agreement for the implementation of a series of urgent measures to mitigate the impact of recent fires on agricultural activity and forests, and to provide support to affected local populations, is urgent and immediate, said Friday in Rabat, the Head of Government, Aziz Akhannouch.

The head of Government commended, in this regard, the significant efforts made by the various stakeholders to control all fire sources. “Thanks to the vision of His Majesty King Mohammed VI, Morocco has significant logistical capacity to extinguish the fires, including firefighting aircraft,” he added.

These logistical means and efforts have helped mitigate the severity of this environmental disaster that has simultaneously affected seven areas of the regions of Tangier-Tetouan-Al Hoceima and Fez-Meknes, Mr. Akhannouch said, adding that these forest fires threatened nearly 120,000 hectares of forest and agricultural cover.

For his part, Minister of Agriculture, Fisheries, Rural Development and Water and Forests, Mohammed Sadiki, noted that this framework agreement aims to provide direct and urgent support to livestock farmers and beekeepers, adding that the emergency program also focuses on the creation of job opportunities for the benefit of the affected populations.

Regarding forestry, the minister said that a total of 150 million dirhams has been allocated to restructuring programs, to assist the population and to promote forestry products.

Echoing him, Minister of Economic Inclusion, Small Business, Labor and Skills, Younes Sekkouri, explained that the support of the ministry involves the creation of 1,000 additional job opportunities in the Region of Tangier-Tetouan-Al Hoceima. The jobs will be dedicated to affected people and members of their families, he added.

The framework agreement was signed by Minister of Economy and Finance, Nadia Fettah Alaoui, Minister of National Planning, Urban Development, Housing and Urban Policy, Fatim Ezzahra El Mansouri, Minister of Agriculture, Fisheries, Rural Development and Water and Forests, Mohammed Sadiki, Minister of Economic Inclusion, Small Business, Labor and Skills Younes Sekkouri, the wali of the Tangier-Tetouan-Al Hoceima Region Mohamed Mhidiya, the wali of the Fez-Meknes Region, Said Zniber, president of the Council of the Tangier-Tetouan-Al Hoceima Region, Omar Mourou, and president of the Council of the Fez-Meknes Region Abdelouhed Al Ansari, said a statement by the department of the head of government.

This agreement, which aims to mitigate the impact of the fires that broke out in July 2022 on the population, includes the taking of various measures in the short and medium term to support the population for the rehabilitation of homes affected that have been identified by public authorities, to launch reforestation operations on some 9.330 hectares and rehabilitate fruit trees affected, strengthen the means of prevention and control of new fires and mitigate the impact on livestock farmers and beekeepers in affected areas, while continuing the implementation of integrated economic development projects in affected areas.