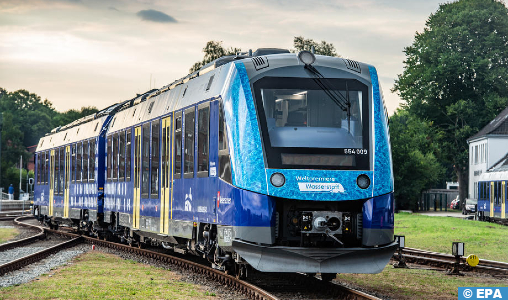 A fleet of fourteen trains, supplied by the French company Alstom to the region of Lower Saxony (north), will replace the current diesel locomotives on the hundred kilometers of the line linking the cities of Cuxhaven, Bremerhaven, Bremervörde and Buxtehud, not far from Hamburg.

Hydrogen-powered trains are a preferred way to reduce CO2 emissions and replace diesel, which still powers 20% of trips in Germany. They mix hydrogen on board with oxygen in the ambient air, thanks to a fuel cell installed in the roof. This produces the electricity needed to drive the train.

Commercial trials have been conducted since 2018 on this line with the regular circulation of two hydrogen trains. The entire fleet is now adopting this technology.

According to the French research institute IFP, which specializes in energy issues, hydrogen is currently “95% derived from the transformation of fossil fuels, of which nearly half is derived from natural gas.”