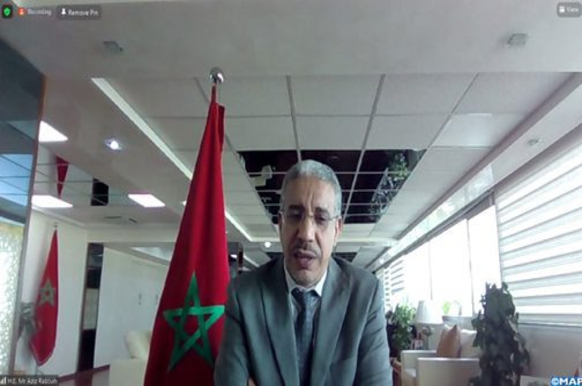 Abu Dhabi – Minister of Energy, Mining and the Environment, Aziz Rabbah, highlighted on Wednesday the measures undertaken by Morocco for the development of the green hydrogen sector.

These measures include the preparation of a national roadmap for hydrogen energy, the creation in 2019 of a National Hydrogen Commission, as well as a series of initiatives related to research and development in this field, said the minister, who was speaking at a ministerial meeting held part of the 11th Assembly of the International Renewable Energy Agency (IRENA).

During this session, held through video conference, Rabbah stressed the need for international cooperation in green hydrogen, especially between developed countries and those with significant potential in this field.

In this regard, he referred to the cooperation agreement between Morocco and Germany for the development of green hydrogen production and the promotion of research and investment, as well as the involvement of the Kingdom in international initiatives and efforts regarding this clean energy, such as the European Green Charter.

Morocco is committed, strongly and voluntarily, in international efforts for climate protection and reduction of greenhouse gas emissions, in order to consolidate the principles of sustainability in the operation of public facilities and in economic, social and development investments, he said.

The Kingdom relies on an energy model based mainly on the development of renewable and clean energy, the strengthening of energy efficiency and the support of technological changes related to the global energy transition, the minister added.

The 11th session of the IRENA Assembly takes place in a virtual setting on January 18-21, 2021. The event brings together Heads of State/Government, Ministers and energy decision-makers among its Membership and States-in-accession, as well as multilateral organizations, global stakeholders and private actors to reassess long-standing assumptions, perceived barriers and default decisions, and discuss the energy transition as an investment in our collective future.

The IRENA is an intergovernmental organization that supports countries in their transition to a sustainable energy future and serves as the principal platform for international cooperation, a center of excellence, and a repository of policy, technology, resource and financial knowledge on renewable energy.