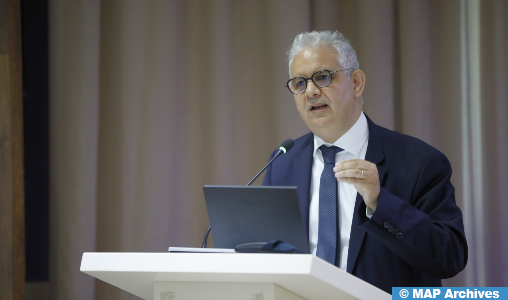 Paris – The Minister of Equipment and Water, Nizar Baraka, presented, Wednesday in Paris, at the UN-Water Summit on Groundwater, the model of the Kingdom in the management of water resources.

Speaking at a session held under the theme “Groundwater and accelerating instrument for the SDG6”, within the framework of this Summit, Mr. Baraka stressed that the Kingdom is committed very early in the path of control of its water resources, through their mobilization, their management based on dynamic planning and anticipation, as well as their protection and preservation.

He has, in this regard, highlighted the major projects conducted by Morocco and led by his department in the field of water, including desalination projects, small dams, as well as the project of reuse of wastewater purified, for more resilience to the effects of climate change.

Focusing on the issue of financing the water sector, the Minister said that funding is mainly from the state budget, stressing that Morocco is registered in “a climate sensitive budgeting”, set up “to ensure that all projects funded by the state budget are absolutely consistent with the Sustainable Development Goals under the United Nations.

He also highlighted the role of public-private partnerships and businesses in the promotion of rational and reasoned uses of water, its preservation and its development.

On the sidelines of this Summit, Baraka had talks with the Ambassador, Director of the program of the United Nations Conference 2023 on water, Nathalie Olijslager, which were an opportunity for the Minister to present the experience of Morocco in the management and control of water resources and to emphasize the willingness of the Kingdom to mobilize for the success of the Water Congress, to be held next March in New York.

Organized in partnership with the United Nations Educational, Scientific and Cultural Organization (UNESCO) and the International Groundwater Resources Assessment Centre (IGRAC), the UN-Water Summit aims to draw attention to groundwater at the highest international level, as a culmination of the “Groundwater: Making the Invisible Visible” campaign, implemented by the UN-Water Task Force.

This two-day event uses the groundwater-focused World Water Development Report 2022 (WWDR 2022) as a reference, and the Global Framework for Accelerating MDG6 as a guideline to define actions towards more responsible and sustainable use and protection of this vital natural resource. It will unify the declarations of all major groundwater-related events into a message for the 2023 UN Water Conference.