Past 7 Years Set to Be Warmest on Record, Sea Level at New High (WMO)

The past seven years are on track to be the seven warmest ever, according to the provisional WMO State of the Global Climate 2021 report, based on data for the first nine months of the year.

Released as climate policy negotiators begin their work at COP26, in Glasgow, the report says that a temporary cooling “La Niña” event early in the year, means that 2021 is expected to be “only” the fifth to seventh warmest year on record.
Global sea level rise accelerated since 2013 to a new high, with continued ocean warming and ocean acidification.

It highlights the destructive impacts on food security and population displacement, crucial ecosystems and in slowing progress towards the 2030 Sustainable Development Goals.

In a video statement, the UN Secretary-General said the report gathers the latest scientific evidence to show that the planet is changing, before our eyes.

“From the ocean depths to mountain tops, from melting glaciers to relentless extreme weather events, ecosystems and communities around the globe are being devastated. COP26 must be a turning point for people and planet,” António Guterres said.

For the UN chief, “scientists are clear on the facts.”  Now, he argued, “leaders need to be just as clear in their actions.”
“The door is open. The solutions are there. COP26 must be a turning point. We must act now, with ambition and solidarity, to safeguard our future and save humanity,” he concluded. 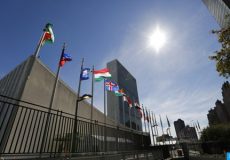