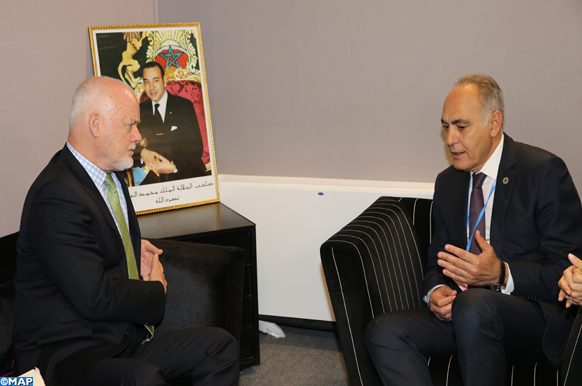 Marrakech 17/11/2016 (MAP) – Peter Thomson, President of the seventy-first session of the United Nations General Assembly, congratulated Morocco on a “very successful” Conference of the Parties to the United Nations Framework Convention on Climate Change.

Speaking on Thursday in Marrakech at the end of talks with President of COP 22, Morocco’s foreign affairs minister Salaheddine Mezouar, Thomson congratulated the Moroccan government and people for hosting a “very important world summit”.

Thomson said he was particularly pleased with the involvement of the private sector and large companies during this COP in the fight against climate change and the reduction of greenhouse gas emissions, noting that companies are now “ahead” of governments because they realize that smart investments are about the new green economy and renewable energy.

Thomson hailed the speech delivered by HM King Mohammed VI before the high-level segment of the COP22, noting that Morocco “set the tone for other countries.”

Talks also focused on important issues, including the implementation of the Sustainable Development Goals (SDGs), he said, adding that SDGs are “a blueprint for mankind”.