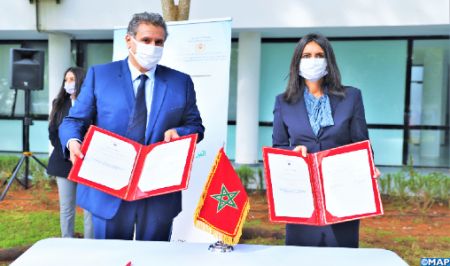 Rabat – Two agreements relating to the National Program for the establishment of new generation agricultural cooperatives were signed Monday in Rabat.

They are a framework agreement relating to the National Program for the establishment of agricultural cooperatives inked by minister of Agriculture, Fisheries, Rural Development and Water and Forests, Aziz Akhannouch, and minister of Tourism, Handicrafts, Air Transport, and Social Economy, Nadia Fettah Alaoui.

Speaking on this occasion, Akhannouch noted that the ministry has worked within the framework of the Green Morocco Plan to provide material and supervisory capacity to professional organizations, including associations, cooperatives and economic interest groups, for the achievements of projects relating in particular to the production sectors.

He said that more than 10,000 cooperatives have been created for the period 2015-2020, exceeding the initial goal of the national program to set up 10,000 agricultural cooperatives, to reach a total of 25,700 cooperatives today, adding that his department remains committed to continue and enhance the achievements under the strategy “Generation Green” launched by His Majesty King Mohammed VI on February 14, 2020, which prioritizes human development.

A specific agreement was also signed between Director General of the National Office of Agricultural Council (ONCA), Jaouad Bahaji, and Director of the Office of Development Cooperation (ODCO), Youssef Hosni, for the establishment and implementation of the national program for the constitution of 18,000 entrepreneurial new generation agricultural cooperatives, through the mobilization of about 1,100 public and private agricultural advisers by 2030.

The said agreement is meant to define and implement joint action plans to move these cooperatives from the traditional to a “Business” model in order to transform them into real productive, autonomous and efficient enterprises.