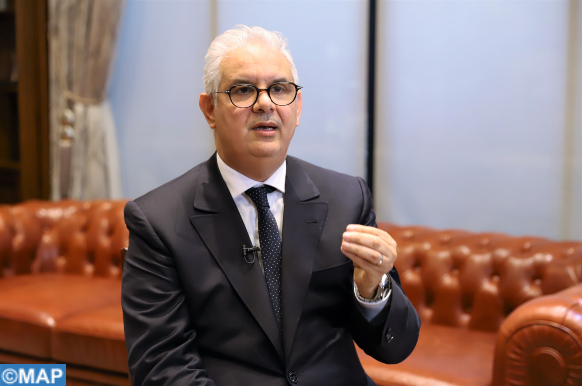 Rabat – The 2021-2022 emergency plan to ensure the supply of drinking water in the Moulouya, Oum Er Rbia and Tensift water basins, to which a budget of 2.042 billion dirhams has been allocated, aims to cope with the water deficit suffered by these basins, said Minister of Equipment and Water, Nizar Baraka.

In addition to this sum, nearly 1 billion dirhams has been programmed for the period 2020-2021, said Baraka in an interview with MAP.

The Minister noted that despite the efforts made and the National Program for Drinking Water Supply and Irrigation 2020-2027, some basins suffer from a water deficit including the Moulouya basin (Oujda and Eastern region), noting that it has recorded a decline in the rate of filling that does not exceed 11%.

This situation is due on the one hand to climate change and declining rainfall and on the other hand to the delay in the implementation of the national water strategy, said the Minister, adding that a desalination plant in Saidia should be completed by the end of 2018, to ensure water supply for the population of Nador Driouch and Saidia.

In order to cope with this water deficit, a program has been set up for the Moulouya basin. Worth 1.3 billion dirhams, this program aims to mobilize all possible water resources, including through the exploration of new groundwater or the launch of a desalination program in Nador, said the Minister.

It was also proceeded in this context to the establishment of new hill dams for the Moulouya basin, he said announcing the realization in the future of 11 hill dams.

Baraka stressed that the Tensift basin is experiencing a water deficit with a filling rate of 34%, noting in this regard that the city of Marrakech also suffers from a problem of water which required the mobilization of 20 Mm3 from a dam to ensure water supply for this city.

In addition, efforts have been made to solve the problem of “water theft” of the region and that of the performance of water channels that recorded losses ranging from 40% to 60%.

Also, the Minister announced the launch in the coming weeks of the large water desalination project in Casablanca of 300 Mm3.