Algiers – Morocco has succeeded Algeria in co-chairing with France the 2019 Steering Committee of the Ministerial Conference on the Initiative for the Sustainable Development of the Blue Economy in the Western Mediterranean “WestMed”.

During this ministerial meeting, Morocco, which is represented by a large delegation led by minister of Agriculture, Fisheries, Rural Development, Water and Forest, Aziz Akhannouch, was officially appointed to take over and co-chair with France , as of 1 January 2019, this Steering Committee of the “WestMed” initiative, currently assumed by France and Algeria.

At the Ministerial Conference, Akhannouch stressed the importance of taking action to ensure effective marine risk management and integrated management of coastal areas that are increasingly facing the vulnerability of marine ecosystems.

In this regard, he called for concrete measures to preserve the biological resources and marine ecosystem of the Mediterranean.

As a stakeholder in the WestMed initiative, Morocco has carried out a series of actions in consultation with other involved parties to define a set of projects within the framework of the blue economy in the western Mediterranean.

These projects focus on the implementation of the Blue Belt Initiative launched at COP 22 in Marrakech in November 2016, which concerns the creation of integrated coastal observing systems and the development of sustainable fisheries and aquaculture as well as coastal communities. 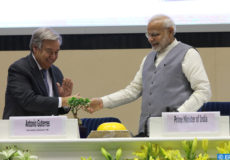